Mr. Luke Warner was born and raised on a working ranch in Montana, and he learned at an early age the value of a hard day’s work.  Working in the construction industry, starting as a laborer and advancing to an independent contractor, created the opportunity for him, in 2012, to join Nodak as a co-owner and Vice President. With 20 years of experience in construction, including 7-years specifically within the oil and gas industry, he has played key roles throughout the company to ensure growth and quality.  As an owner, and the current CEO, as well as Executive Board Member of Nodak Oilfield Services, Mr. Warner has continued to serve his team as proud member of a company that has seen thousands of successfully completed projects, the addition of 3 new divisions to the Nodak portfolio, and a bright future.

Mr. Clinton Hacker comes to the company as an operations executive with 8 years of Oil & Gas experience in the Bakken. Mr. Hacker is responsible for the start-up of Nodak’s Mechanical and ALS Divisions, along with their continued growth. In his current role as COO his energy has been focused on a synergistic corporate structure across all divisions. Prior to Nodak, Mr. Hacker held senior management positions where he focused on strategic growth opportunities, operational functions, and company culture. Mr. Hacker’s dedication to managed growth and support of his workers makes him an integral member of Nodak Oilfield Services.

Mr. Lutz, was born in Allentown, Pennsylvania, where he spent most his youth and after graduating high school, he joined the US Navy. Upon his return from the Navy, he continued courses at the University of Maryland and at LCCC. In 1998 he became a police officer on the east coast and continued to serve for many years and left the department to run an advertising agency in Pennsylvania..

In 2010 his parents retired back to their home state of North Dakota and started a pheasant hunting lodge. Brom and his family came out shortly after to help grow the hunting lodge looking to pursue many oil field endeavors. The first project was to build a modern-day diesel refinery in the Trenton area which expanded to purchasing industrial land and mineral rights to cultivate. Brom is part owner in a sand hauling company that functions primarily in the Bakken region. He is also currently on the local school board and serves on the API board of directors.

He currently resides in Trenton ND, with his wife and 3 children.

Chad Feller is the Construction Director/Co-Owner of Nodak.  Chad is from McGregor, Iowa and has 12 years of experience in the construction business.

Mr. Lee Lindborg was recruited by Chad Drake in January of 2014 to strengthen the management team and assist in the company’s expansion plans.  Lee works in many aspects of the company’s day to day operations and his current primary focal points are serving as the Insulation Division Director and the EHS Division Director. Having a construction career spanning 37+ years with much of it in construction management, he has spent the last 5 years in the oil and gas industry working for Nodak Oilfield Services.

Mr. Richard Fick comes to the company with 4+ years of experience in Construction. After high school in 2007 he became a framer. After graduation he spent 4 summers working in Alaska in the fishing industry and would return to Minnesota in the winters continuing to hone his skills as a carpenter. He came to work for Nodak 5 years ago and has worked his way up to be the Construction Manager.

Kyle Kachelhoffer has spent his professional career in the oil and gas industry in the North Dakota Bakken, since 2007. He has spent the past 12 years; performing and directing on-sight field operations, coordinating construction projects, developing and managing subcontractor programs, performing logistics and material procurement, and currently functioning as the Mechanical Division Manager for Nodak Oilfield Services.

Mr. Ralph Morales started with Nodak in the fall of 2016 as an insulator. Ralph quickly moved up to the position of a crew lead, directing the primary crew which serviced and maintained the Hess account. In 2019, Ralph’s continued attention to detail and safety earned him the position of Insulation Division Manager. Ralph has a long history in the construction industry, as well as, working in the oil and gas industry, and has proved to be a valuable team member.

Craig Holden brings 9+ years of experience in Project Controls, 15+ years of IT practice, and much managerial insight. He has a bachelor’s degree in Economics and is a certified Primavera 6 Scheduler.  Prior to Nodak, Craig worked for several oil and gas companies, Nuclear Power Plants, and a variety of other jobs ranging from private tutor, to youth pastor, from cellphone tower repair, to R&D for water purification. Born and raised in ND, he is perpetually curious and lives to learn.  His detailed project oversight at Nodak has him currently in the position of Senior Project Manager.

Ms. Leann Esterby started with Nodak back in 2016 and has been an effective contributor and a significant asset to the Nodak team since day one. She brings many years of experience in accounting and administration, further supplemented by an Associate Degree in Business Management and Accounting.  Prior to Nodak, Ms. Esterby worked for Onsite Safety for 5 years as the Administrative Manager and has been a local business owner for the past 27 years.

Chad Drake
President & Chairman of the board

Chad Drake is the face of Nodak Oilfield Services. His vision, integrity, and love of community created the foundation for what Nodak Oilfield Services has become. With a strong personal work ethic and a knack for finding the best talent, Chad has been instrumental in every area of growth experienced in Nodak over its life. He has a passion for carpentry, genuinely helping others, and fine bourbon. Chad Drake has recently stepped down as CEO and is focusing his time on new adventures.

Trisha Johnson comes to the company with 5-years of experience in Safety Administration, a bachelor’s degree in Paralegal Studies from the University of Texas, holds her RP (Registered Paralegal) and ACP (ADVANCE Certified Paralegal) in Trial practice and Contract Management. She is an Instructor for PEC Safeland, H2S and is actively advancing her Instructor credentials towards obtaining her Master Instructor, in PEC Safeland. Prior to Nodak, Mrs. Johnson worked for an Attorney in Oil and Gas and assisted with contracts, litigation and collections, and was the Safety Administrator for a North Dakota based oil rig moving company.  Trisha has implemented and maintained a successful and compliant Safety Management Program during her tenure at Nodak.

Mr. Shamel Costandy comes to the company with 25+ years of international experience in financial accounting, auditing, planning, analysis, budgeting and reporting. He has a bachelor’s degree in Commerce from Cairo University, is a Chartered Accountant and a Certified Internal Auditor. Mr. Costandy started his career by working for one of the “Big Four” auditing and consulting firms - and he later worked as the CFO of a Canadian oilfield services company and has held different financial management positions with companies operating in Canada, the Middle East, and the United States.

we believe the foundation of all great things are simple, all-inclusive and consistent.

Over the decade, Nodak Oilfield Services has provided solutions for the Upstream and Midstream Bakken Operations.

Nodak Oilfield Services is one of the most highly-trained and experienced service companies in the Bakken. Our value-added starts with our employees, who are hired for their experience and qualifications. Builders, Insulators, Field Technicians, and Roustabouts are hand-selected and consistently trained in safe-work practices and delivering quality.

Nodak Oilfield Services can find solutions to almost any Upstream or Midstream Oilfield need and is a contractor for many major producers and operators in North Dakota.

Today, Nodak Oilfield Services has five Divisions; Commercial Construction, Piping and Tank Insulation, Mechanical Services,  Flare Mitigation & Elimination and Safety Training, to serve a wide variety of clients, with an excellent range of products and services, with an unparalleled, record of safety. 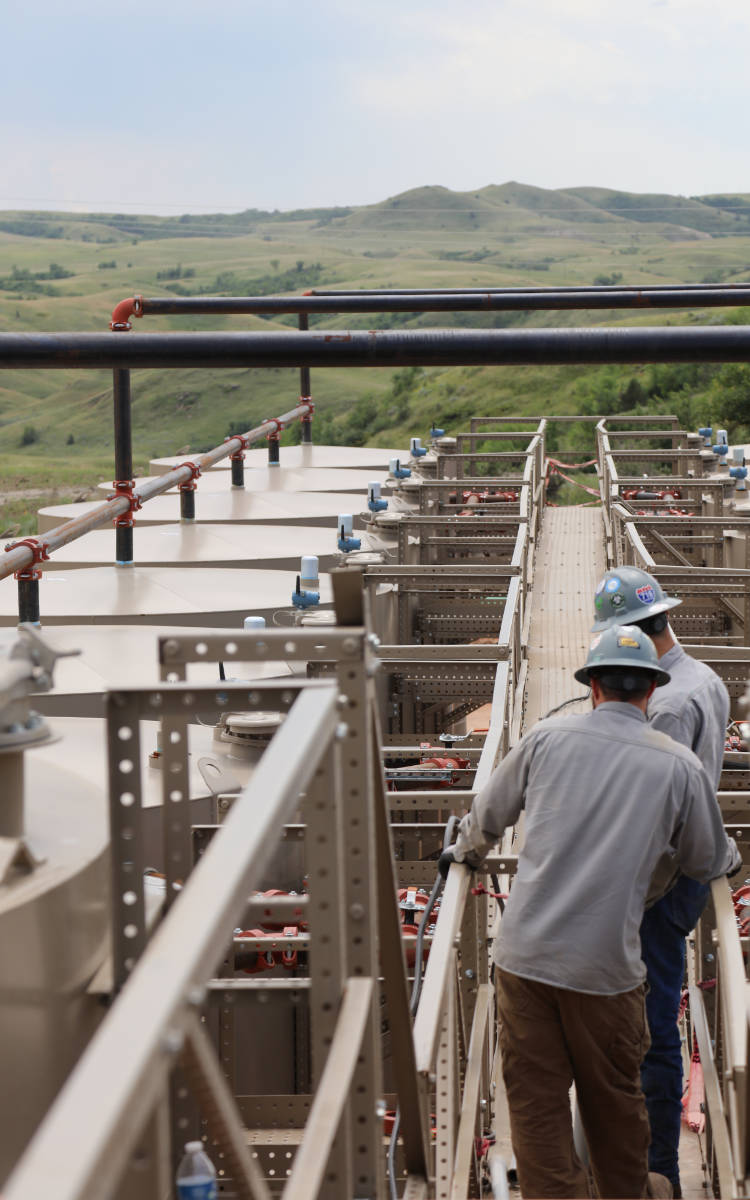 In his role as COO, his energy has been focused on a synergistic corporate structure...

Recruited in January of 2014 to strengthen the management team and assist in the...

Born in Allentown, Pennsylvania, where he spent most his youth...

Originally from McGregor, Iowa and has 12 years of experience in the construction...

With a professional career in the oil and gas industry in the North Dakota Bakken...

Started with Nodak in the fall of 2016 as an insulator. Ralph quickly moved up to the...

He joined Nodak 5 years ago and has worked his way to be the Construction...

Bringing 9+ years of experience in Project Controls, 15+ years of IT practice, and...

With 25+ years of international experience in financial accounting, auditing, planning...

Bringing many years of experience in accounting and administration, further...

With over 7-years of experience in Safety Administration, a bachelor’s degree in Paralegal...

CHAD DRAKE
President & Chairman of the Board

The face of Nodak Oilfield Services. His vision, integrity, and love of community created...

As an owner, and Executive Board Member of Nodak...

Originally from McGregor, Iowa and has 12 years of experience in the construction...